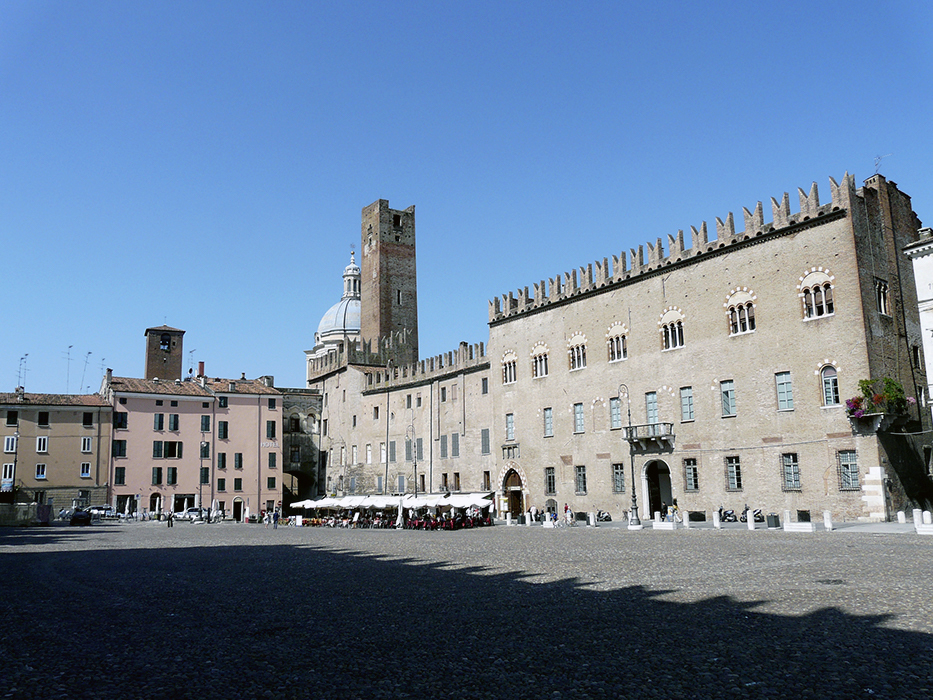 Piazza Sordello during the Lordship of the Gonzaga family became the political and representative centre of the city, on the west side there are the palaces Acerbi and Bonacolsi and the Bishop’s Palace, built in the 18th century on previous buildings of the 13th century also built by the Bonacolsi.

On the southern side of Acerbi Palace there is the Voltone of St. Peter which connect Piazza Sordello with Piazza delle Erbe. Towards the end of the third quarter of the 13th century, this ancient city gate of the first walls of Mantua, was transformed into an elevated passage between the two palaces that the Bonacolsi family, at that time holding the position of Captain of the People, had purchased to transform them into their townhouse. The passage as we see it now is due to a cover-up intervention of the 16th century. The Bonacolsi first bought the palace and the tower to the left of the door built by the Acerbi family, then the palace to the right, finally, at the end of the 13th century, Pinamonte Bonacolsi built the great palace Bonacolsi, also called Castiglioni. At that time the Bonacolsi palaces overlooked a narrow street since Piazza Sordello was created in 1330 demolishing the buildings between two parallel streets that still followed the ancient Roman urban design. The tower that dominates the Voltone before being incorporated into the Bonacolsi palace complex was owned by the Acerbi family, and it was named Tower of the Cage after 1576, when Count William Gonzaga installed a suspended cage on the southern side with the function of outdoor prison.

On the north side there is the Cathedral, and, on the east side, the 13th-century facade of the Captain’s Palace followed then by the “Domus Magna“, buildings that later became part of the Complex of Palazzo Ducale.

The Captain’s Palace was built towards the end of the 13th century by the Bonacolsi family, then, after the expelling of these, became the property of the Gonzaga, who in conjunction with the gutting for the construction of the square, between 1330 and 1340 made the loggia on the ground floor and raised it with one more floor, creating a large parlour on the second floor.

On the northern side of Piazza Sordello is located the Mantua Cathedral. In the site of an early-Christian church, between the end of the 11th and early 12th centuries, perhaps during the reign of Matilda of Canossa, a new Romanesque structure was built, of which remains the bell tower. In the late 14th and early 15th centuries, with the erection of St. George’s Castle, Francis I Gonzaga redeveloped in Gothic style the Cathedral. The mixed facade can be seen in the framework of 1494 by Domenico Morone: The banishment of the Bonacolsi, now housed in the Palazzo Ducale. In 1545 Giulio Romano was commissioned to redesign the interiors that were rebuilt reflecting the early-Christian structure of the ancient Basilica of St. Peter in Rome. We do not know how much of the original project was later realized since Giulio Romano died the following year. The baroque marble facade was built in the mid-18th century. 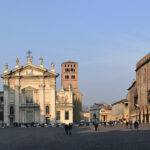 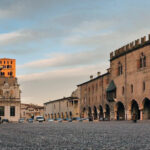 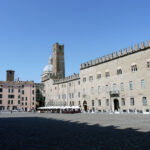