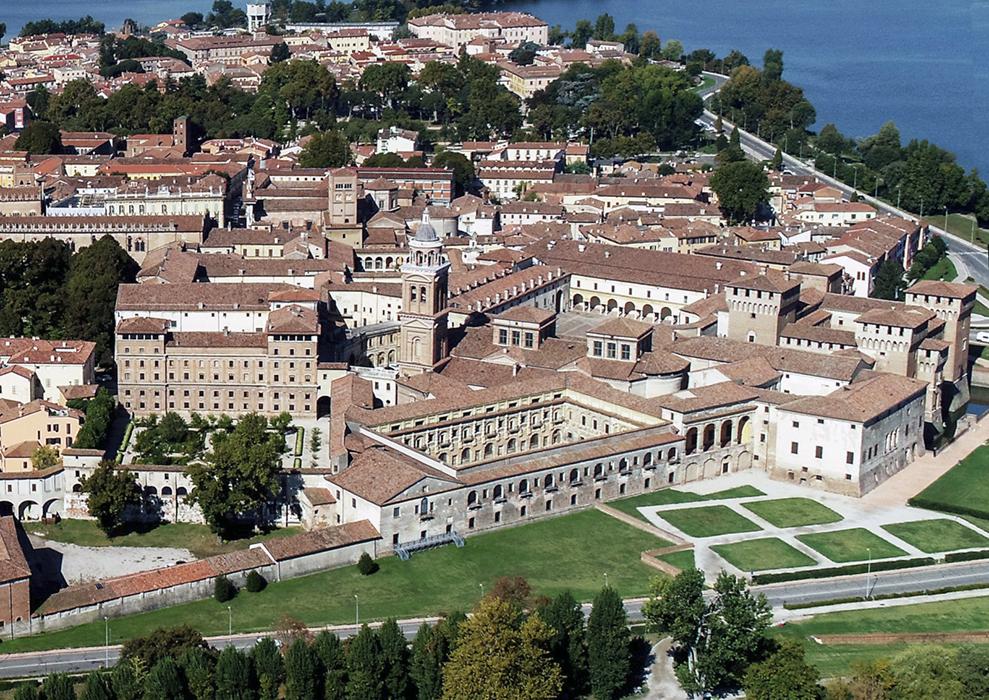 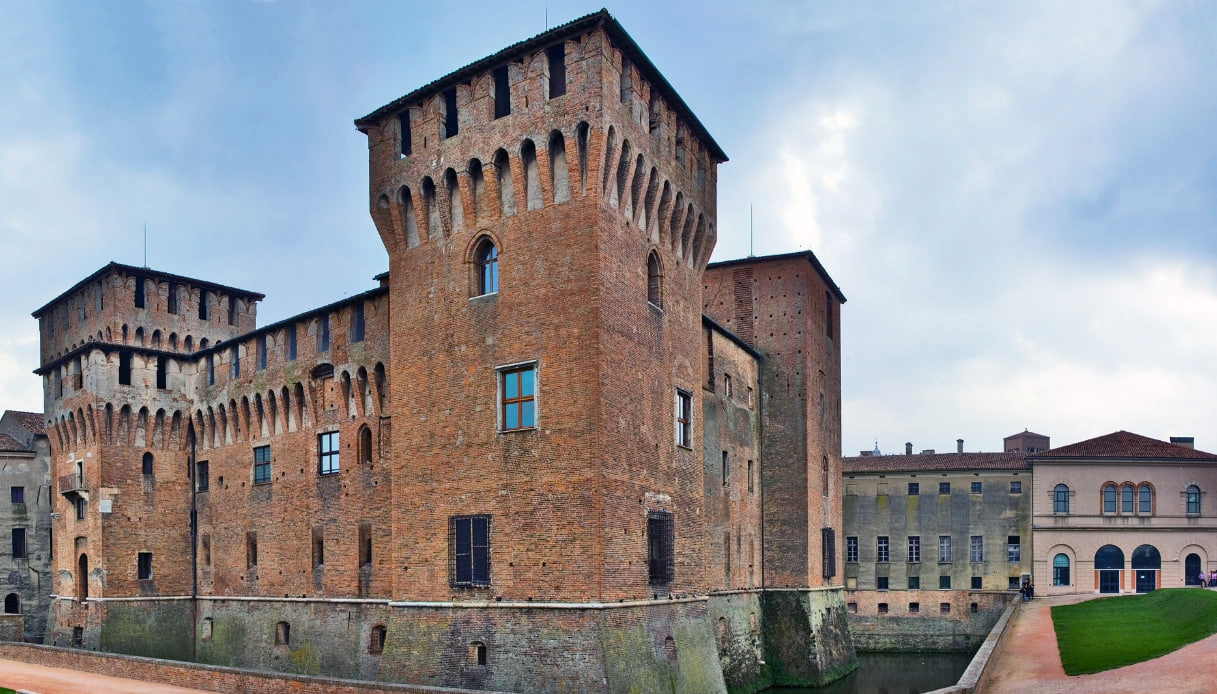 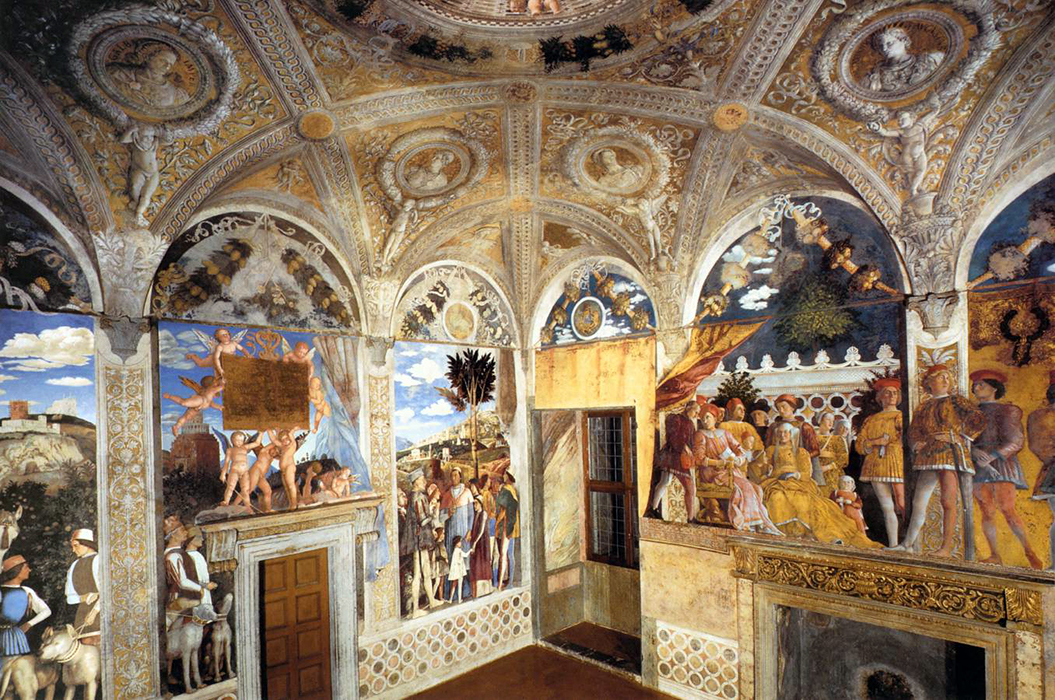 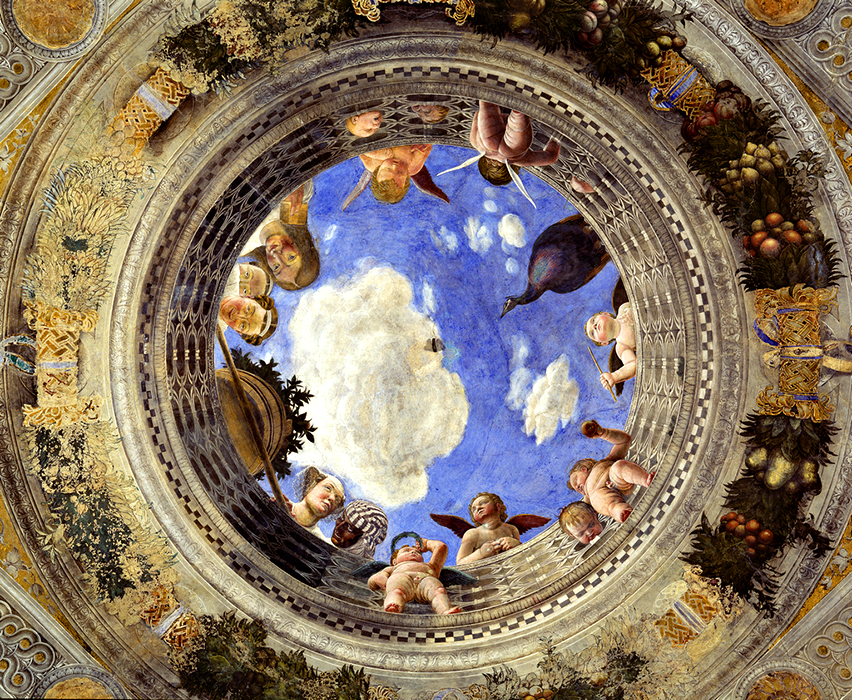 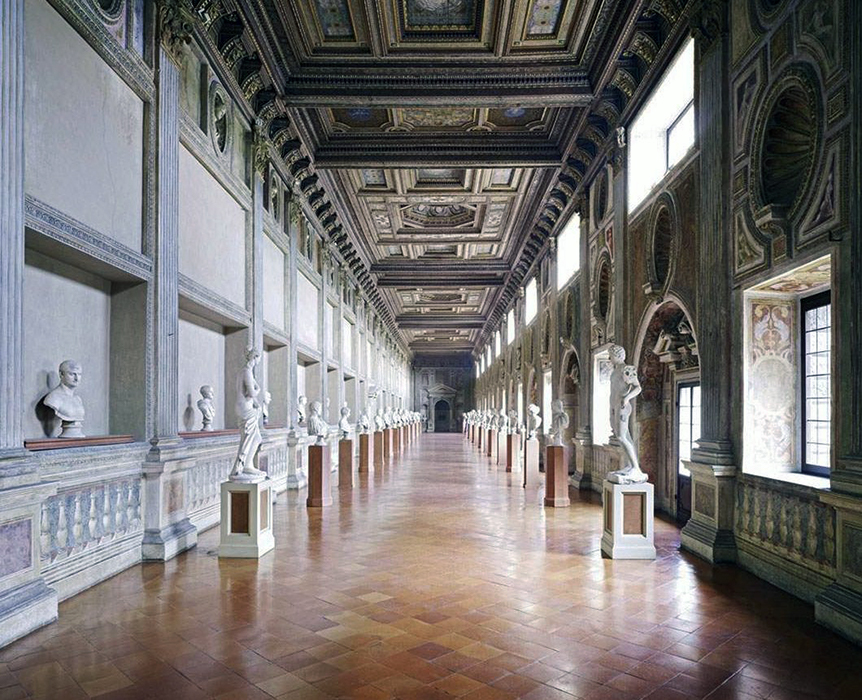 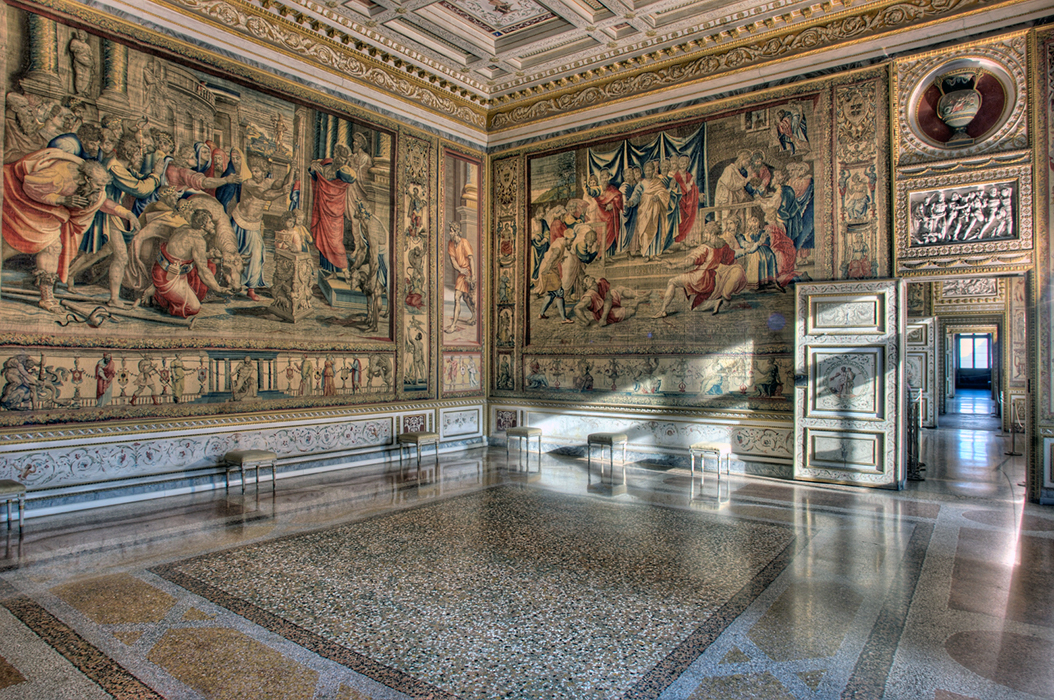 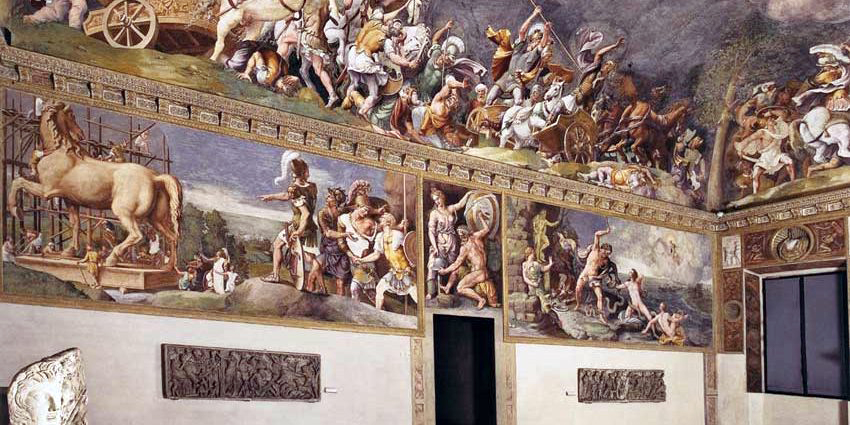 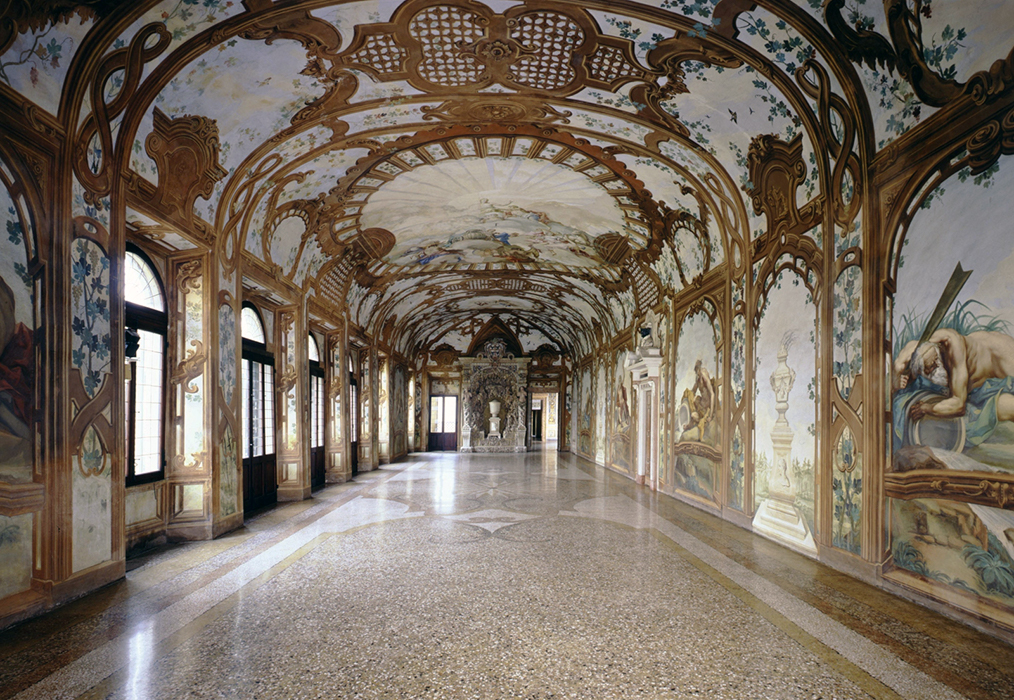 Entering Piazza Sordello in Mantua from the southern Voltone di San Pietro at your right you can see the 13th-century facade of the Captain’s Palace followed then by the “Domus Magna“, buildings that later became part of the Complex of Palazzo Ducale.

The Captain’s Palace was built towards the end of the 13th century by the Bonacolsi family, then, after the expelling of these,it became the property of the Gonzaga, who in conjunction with the gutting for the construction of the square, between 1330 and 1340 made the loggia on the ground floor and raised it with one more floor, creating a large parlour on the second floor.

The Palazzo Ducale complex is one of the largest buildings in Europe, occupying more than 35,000 square meters with more than 500 rooms, 7 gardens and 8 courtyards. The Palazzo Ducale is divided into four different areas. The Old Court including the oldest buildings near the square Sordello. The St George’s Castle built near the walls, between 1394 and 1406, by Francesco I Gonzaga during the stormy years characterized by the clashes with Gian Galeazzo Visconti. The Domus Nova, to the east of the Old Court, built around 1480 by Luca Fancelli and renovated about a century later. Finally, the New Court built from 1536 by Giulio Romano.
Towards the end of the 16th century, a series of works began to fit all the various buildings in one complex.

The interiors are grandiose and have decorations ranging from the late Gothic to the Baroque. Unfortunately, they are particularly naked because a large part of Gonzaga’s art collections were alienated in 1626, then in 1630, The palace was raided by the Lanzichenecchi and finally, the remaining furnishings were taken away by the last duke who took refuge in Venice. Some of the furnishings that are present now, were placed during the Habsburg period by taking them from some noble residences, including those of the Pico family from Mirandola. Among the masterpieces that remain in the ducal Palace are the frescoes and synopses painted, between 1436 and 1444, by Pisanello and depicting the Tournament-battle of Louvezerp. They were covered by a plastering at an unspecified time and were rediscovered in 1969. Also worth noting the tapestries of the Acts of the Apostles, a replica, on cartoons of Raffaelo, made by the same Belgian workshop that had made those commissioned by Pope Leo X between 1514 and 1516 for the Sistine Chapel. Then the fragments of the canvas painted by Rubens between 1604 and 1605 depicting the Trinity worshipped by the Gonzaga family. This canvas was part of a triptych made for the church of “Santa Maria della Trinità”. During Napoleonic wars, the church was deconsecrated and the triptych commandeered. The two side canvases ended up in Antwerp and Nancy, while the central canvas was also cut to make portraits to sell on the antique market. Finally, The most remarkable masterpiece is housed in St George’s Castle, which was from the middle of the 15th to the middle of the 16th century the residence of the ducal family. This is the “Camera degli Sposi” frescoed, between 1464 and 1475, by Andrea Mantegna. In this square room, Mantegna paints a false architecture representing a loggia opened on two sides and the ceiling, with a central oculus, outwards. The first of two main walls depict the Gonzaga court gathered around Ludwig III and the second the meeting between Ludwig III and his son Francis cardinal with Rome in the background. 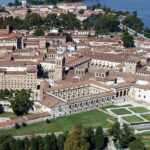 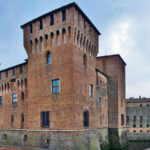 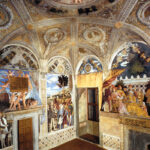 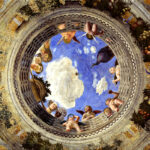 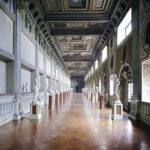 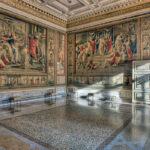 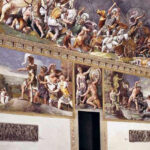 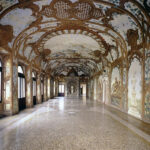