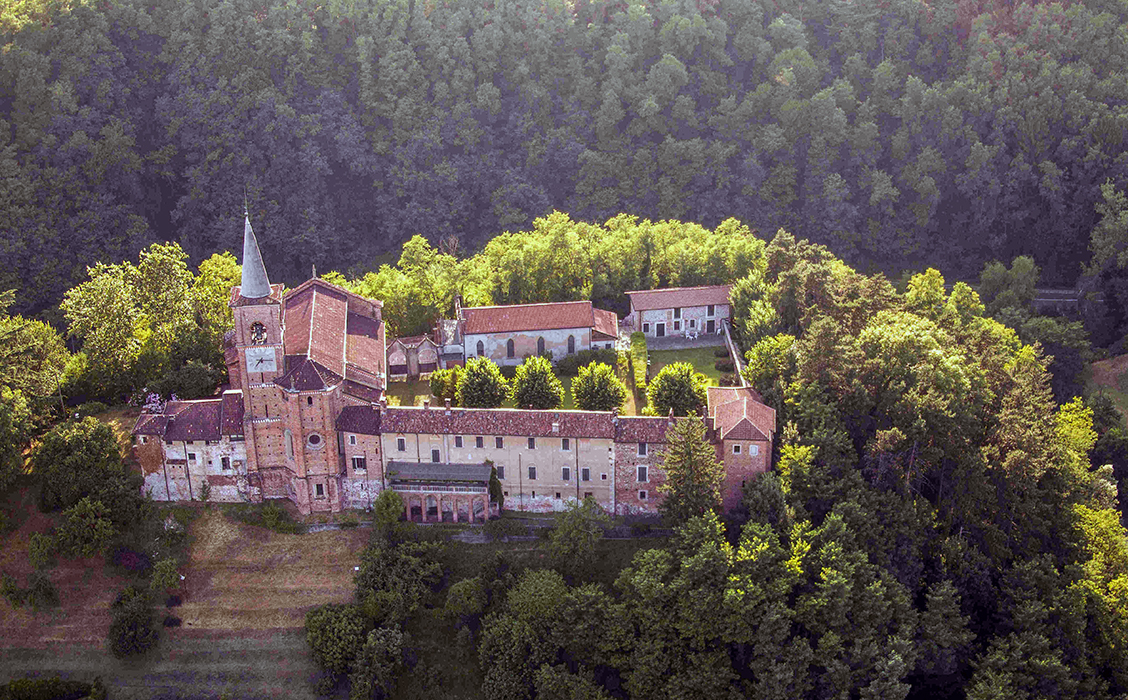 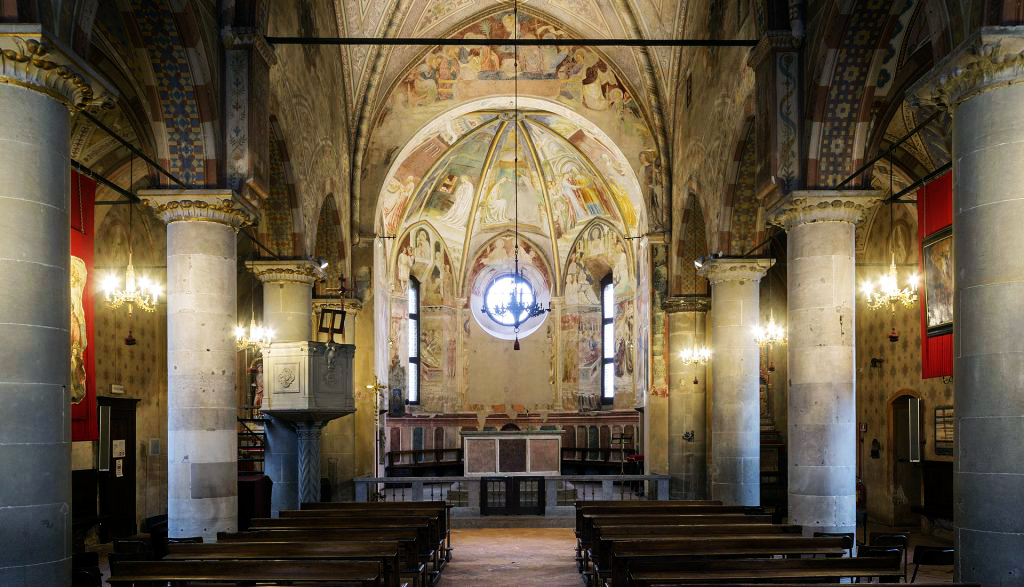 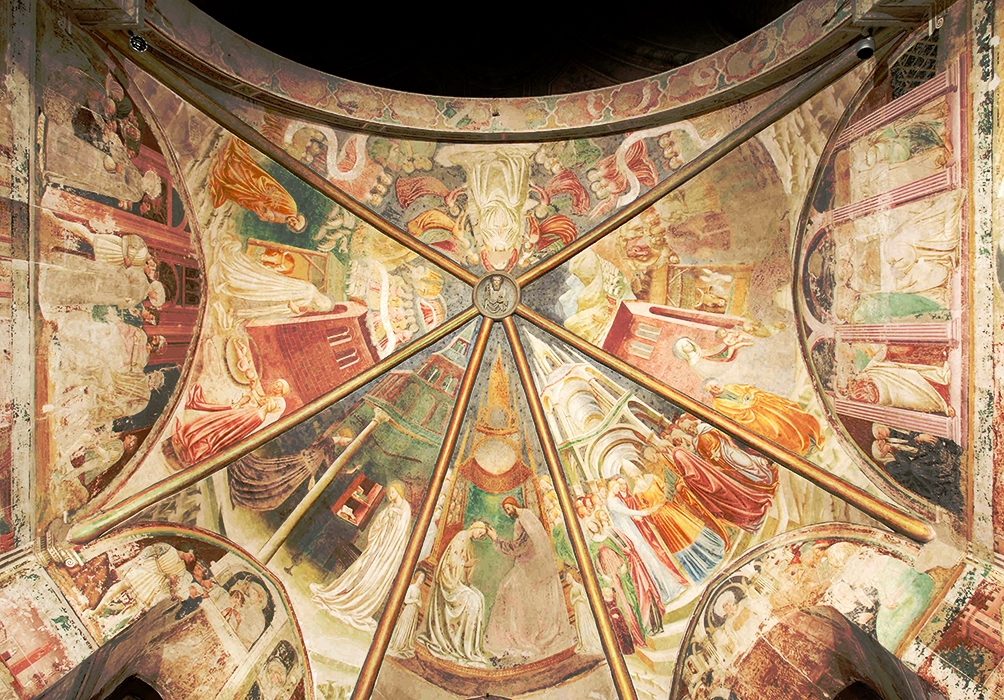 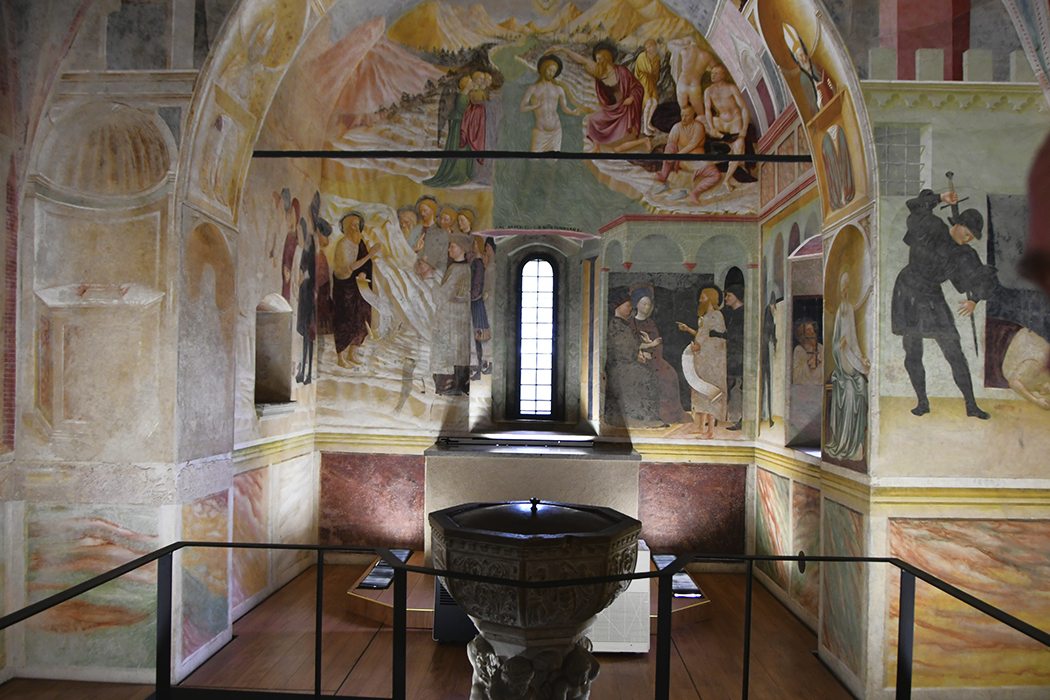 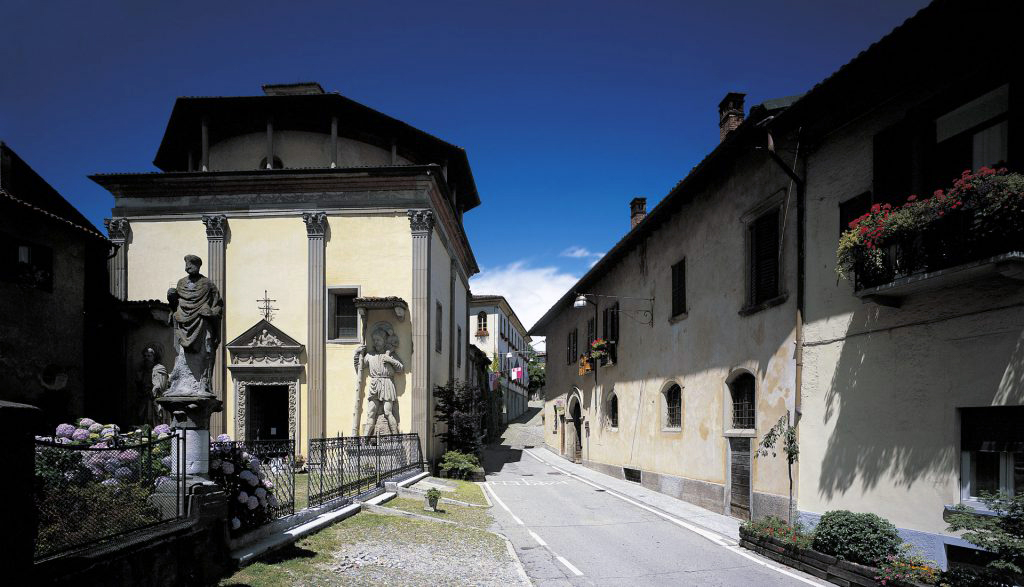 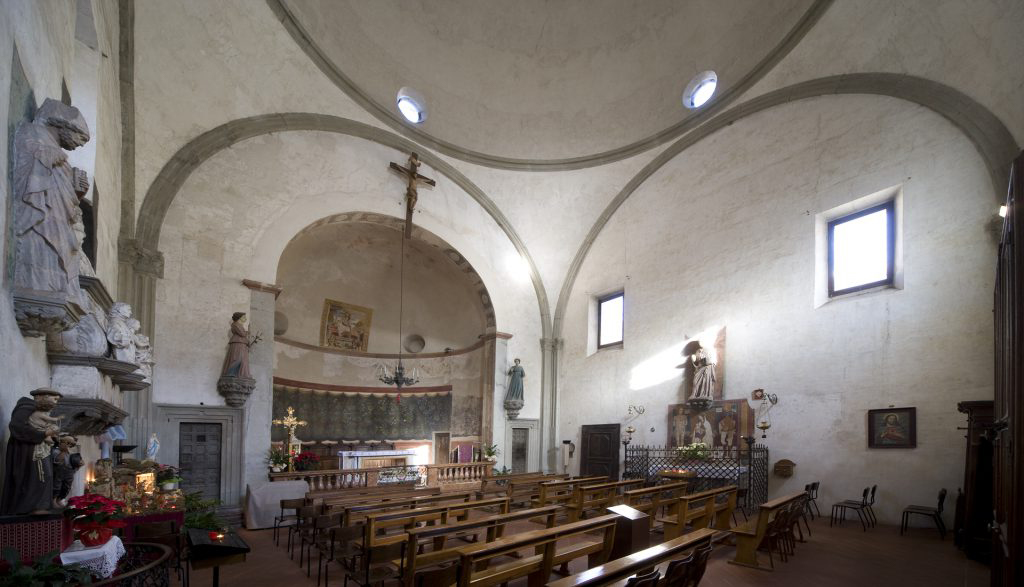 Castiglione Olona is a small town in the province of Varese along the Olona river. From the beginning of the 19th century, it became an industrial centre. But what interests us is the ancient centre on the slopes of a hill that rises inside a narrow bend of the river. The origins of the town date back to the early 5th century A.D. when the Roman army commanded by Stilicho founded a fortified camp to guard the road that connected Milan with Lugano.
During the Lombard and Carolingian times, the village was probably close connected to the nearby fortified Castrum of Castelseprio which was the administrative centre of this district.
Around the year 1000 Castiglione Olona became part of the assets of the Castiglioni a Milanese noble family of Lombard origins.
Between the 12th and 13th centuries, the town was equipped with walls and a fortified stronghold on the top of the hill, since they were rather insecure periods due to a series of struggles for the control of Milan and the region between the Della Torre and Visconti families, which culminated, between 1285 and 1287, with the complete destruction of Castelseprio and the subsequent decree of perpetual abandonment issued by the archbishop of Milan Ottone Visconti.
The Castiglioni family comes out of this phase with a solid link with the Visconti family, new lords of Milan.
The heyday of Castiglione Olona, ​​with the construction of its main monuments that make it one of the most important sites of the early Lombard renaissance is due to the work of Cardinal Branda Castiglioni.
He was born in 1350, and despite being the eldest son he decided to drop the noble privileges to become a cleric. He attended the University of Pavia where he graduated in civic and canon law. Thanks to good relations with Gian Galeazzo Visconti he was sent to Rome in 1389 to the papal court. Here, thanks to his legal and diplomatic skills, he managed to make a career as papal legate and apostolic nuncio in Germany, Flanders and Hungary, where he forged a friendship with the Emperor Sigismund of Luxembourg. Between 1409 and 1414 he also had leading roles in the councils of Pisa and Constance in the reconstruction phases of the Western Schism which, after the Pope’s return to Rome from Avignon in 1378, had seen the church divided with the election of popes and antipopes.
In the first decades of the 15th century Branda Castiglioni, appointed cardinal in 1411, began a series of works in Castiglione Olona. He enlarged the family palace and, between 1422 and 1425, he made built the church of Santi Stefano e Lorenzo called also “la Collegiata”, with rectory and baptistery, on the foundations of the fortress. He assigned the task to the Solari brothers, sculptors and architects, including Giovanni who in the following years was director of the works of the Milan Cathedral and the Certosa of Pavia.
The Collegiate is a brick building in Lombard Gothic style with a gabled façade divided in three by pilasters.
During this period Cardinal Castiglioni was also numerous times in Florence where he met the painter Masolino da Panicale who collaborated with Masaccio on the frescoes of the Brancacci Chapel. Masolino was invited to Castiglione Olona where, together with collaborators also from Tuscany like Lorenzo di Pietro from Siena called Il Vecchietta, he took care of the frescoes of the Collegiate Church, the baptistery and the Branda Castiglioni palace.
Certainly of Masolino are the cycle of the stories of Mary on the apsidal spandrels of the Collegiate, the stories of St. John the Baptist in the baptistery and a Hungarian mountainous landscape in the Branda Castiglioni palace.
Another important building is the church of Villa which stands in the main square of the village. This church was built, probably based on a design by Vecchietta, between 1437 and 1444.
The proportions of the exterior, the use of duotone both inside and outside, clearly inspired by the Old Sacristy of San Lorenzo in Florence, make of this church the first example of a building inspired by the work of Filippo Brunelleschi outside Tuscany.
Cardinal Branda Castiglioni died at 93 years of age in 1443. 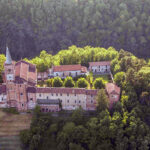 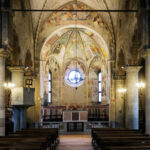 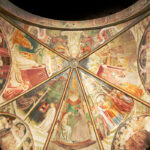 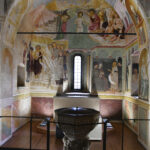 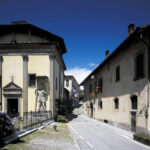