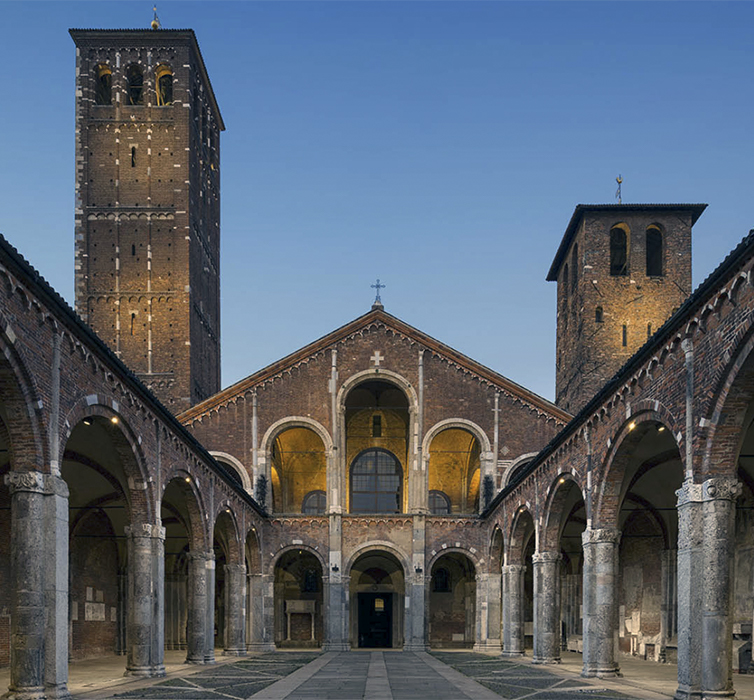 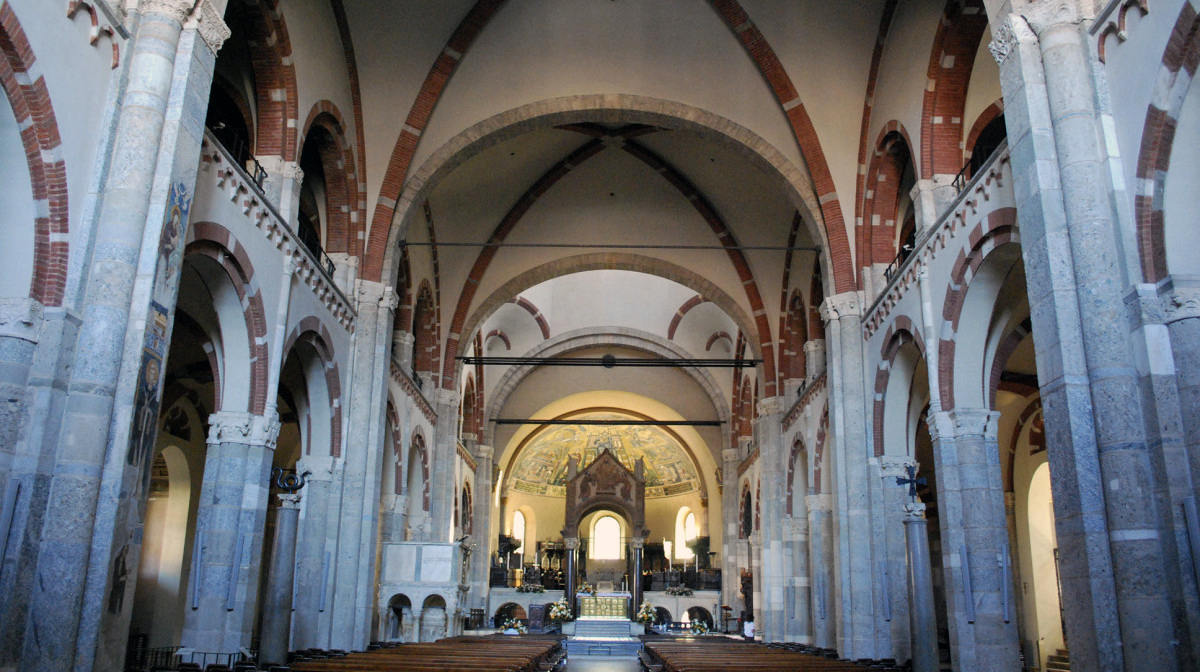 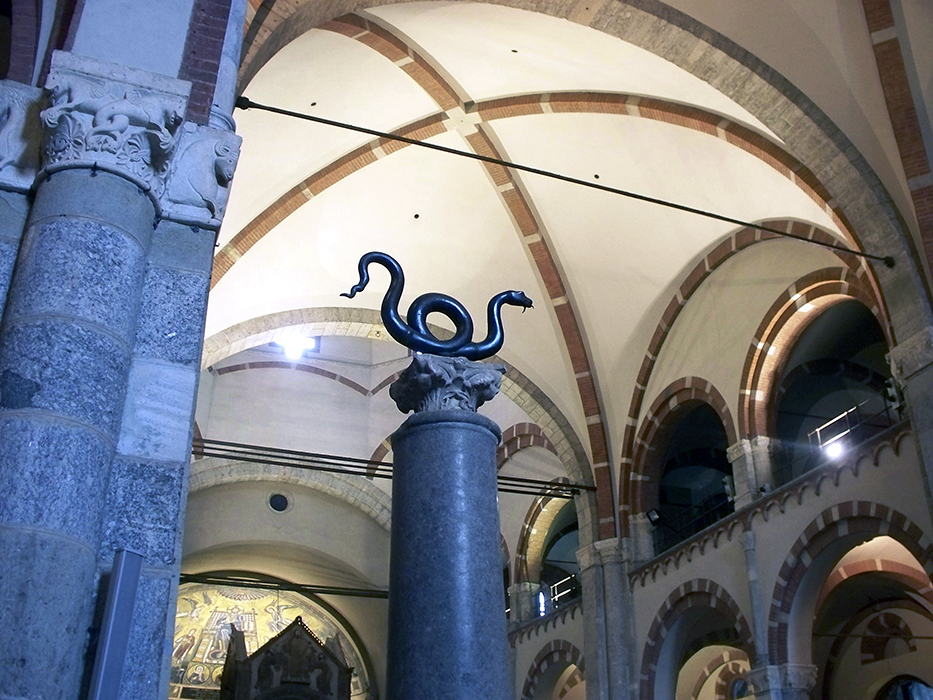 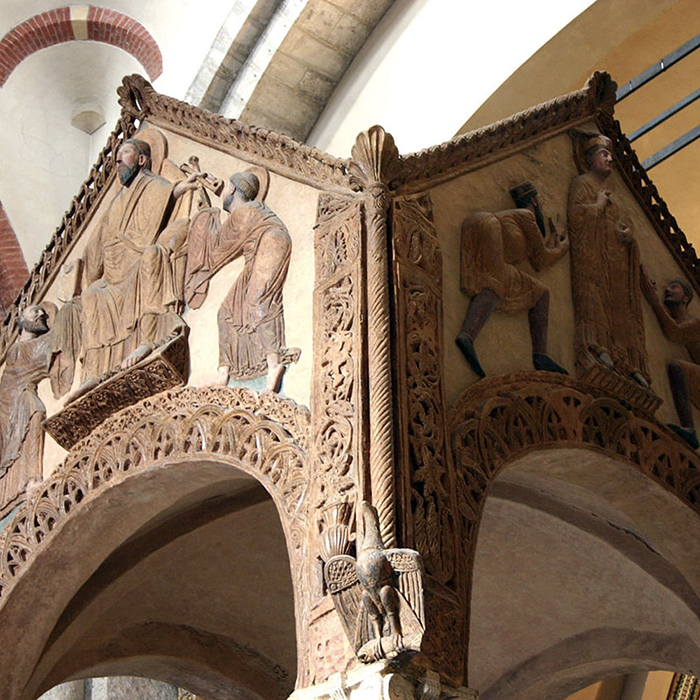 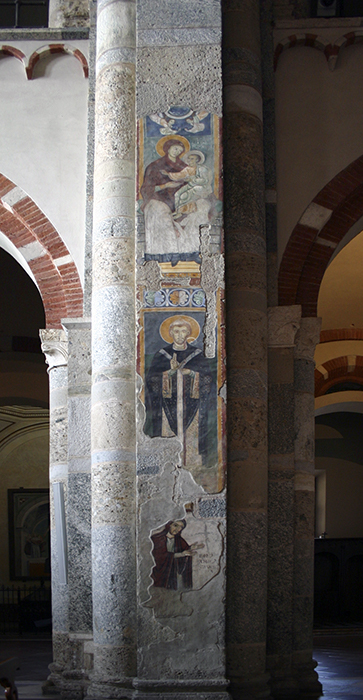 The late ancient Ambrosian basilica was a long building with three naves with apses, the central one wider and taller than the two lateral ones. The roof of the central nave was a two-pitched wooden roof, while the two lateral aisles had a single-pitched roof. In front of the entrance, there was a four-sided portico, which excluding the apses, replicated the dimensions of the basilica. The four-sided portico was intended to house catechumens, that is, people awaiting baptism since at that time it was not yet customary to baptize infants.

In addition to the plan that respects the original, only a few fragments of this first building remain, the sarcophagus of Stilicho and the columns that support the ciborium. In the fifth century AD two funeral chapels were built. One of these is the Shrine of San Vittore in Ciel d’Oro (in the golden sky), that now it is joined to the basilica structure, which has a vault decorated with a gold leaf mosaic with the effigy of San Vittore in the centre, hence the name, and on the walls, other mosaics with saints depicted, including the oldest depiction of Sant’Ambrogio.

In 784 a Benedictine monastery was founded near the basilica. Testimonies of the 9th and 10th century interventions are the central apse which was enlarged and covered by a barrel vault, the mosaic decoration of the apsidal basin (what we see now is the restoration after the destruction due to the bombing of the Second World War), the ciborium, the altar of Sant’Ambrogio, a Carolingian goldsmith’s masterpiece (created by master Vuolvino between 824 and 859), and the right bell tower.

Between 1088 and 1099 the basilica was rebuilt in Romanesque style, respecting the plan of the previous building. The left bell tower was built in the first half of the 12th century, the lantern built towards the end of the 12th century collapsed almost immediately, what we can see now is to be dated to the beginning of the 13th century.

Between 961 and 1355 numerous emperors of the Holy Roman Empire were crowned as kings of Italy with the Iron Crown in the Basilica of Sant’Ambrogio. At that time it was usual that before being crowned in Rome by the pope the emperor had to first receive the crowns of Germany and Italy. The monastery connected to the basilica in 1497 passed by the Benedictines to the Cistercians of Chiaravalle until 1799 when it was suppressed by Napoleon. In 1943 the basilica was partially destroyed by aerial bombing and restored after the war ended. Note the monastery cloisters designed by Bramante in 1492, now part of the structures occupied by the Catholic University of Milan. Inside the basilica, above a late ancient granite column is the so-called Serpent of Moses, it is a bronze sculpture donated by the Byzantine Emperor Basil II in 1007. In Piazza Sant’Ambrogio there is an ancient Roman column, perhaps from the remains of the imperial palace. This column was already in this place in the late medieval period and was part of the coronation rituals of the king of Italy. Given the presence of two holes on the surface of the column, a popular tradition called it the devil’s column and gave rise to a legend in which the devil trying to frame Sant’Ambrogio instead stuck the horns in the column and when he managed to free himself he escaped. 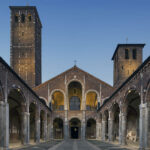 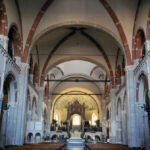 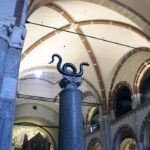 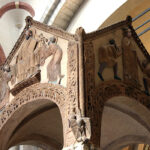 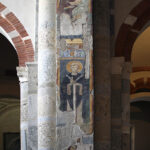